Everything starts in April in Japan.

Most of Japanese people remember their entrance ceremonies, especially the one for elementary school more than for kindergarten, middle school, high school or university.

Everywhere in Japan, children aged six are held by hand by the young their mothers and enter the elementary school gates covered with cherry blossom.

They have both expectation and fear of thing happening around them for the first time.

The day before, the mother writes her son’s name on his new school goods, excise books, notebooks, eraser even a pencil and satchel the grandfather bought with care. This is to ensure they are not mixed up with those of other children.

They change their shoes to indoor shoes to enter the classroom where the teacher welcomes them and shows them their seat.

After few days of going to school, they become close friends with one another. In the classroom, they choosing class representative and form a small community.
The most different thing between kindergarten and elementary school is that the parents do not take their children to kindergarten nor pick up them.
Usually elder boys and girls make a group, two to ten children, and escort younger children to the school with them. And there are lollipop ladies at the pedestrian crossings to make sure children can safely cross the road by raising their right hands.
Children have homework every day; addition, subtraction and how to write Japanese with two different forms, ’ Katakana’ and ‘Hiragana’.
If they don’t do their homework, the next day at school, the destiny of standing alone in the hall way is waiting. This is the most embarrassing moment for a boy when a girl who he likes sees him standing for punishment.

In foreign countries such as Australia and New Zealand, they graduate in January or February, but in September in USA, Canada, Great Britain and France. They do not have entrance ceremonies like in Japan. They just have welcome parties. 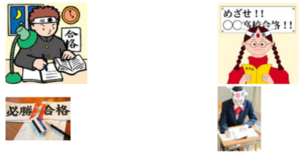 Not only do Japanese schools start in April, every company in Japan welcomes new workers in April too.

we do study for examination to enter a good school ,the good company

In Japan, most important things start in April.