In Japan, we have four seasons (Spring, Summer, Autumn and Winter). We change our clothes to fit the season, with short-sleeved shirts for summer and long-sleeved shirts for spring and autumn. In winter we wear coats. We have a good sense of fashion and love to change our clothes to suit the different seasons. In each season, different flowers bloom. Some people love to plant seasonal flowers and to go to the suburbs to see beautiful flowers and trees with friends.
In the night of the 15th of September is revel as having the most beautiful night sky of the whole year. You can see the moon and even distant stars. The 15th of September offers us a full, mid-Autumn moon that is the most beautiful moon of the year, known as the ‘heaviest moon’ or the ‘full moon of the 15th’. A common fairy tale states that a giant rabbit live in the moon, beating ‘mochi’ or soft rice cake.

This custom crossed to Japan from China. In China, there has been a festival known as “Chu-shu-setsu” since the Tang era which makes the autumnal equinox. This custom came from China to Japan between the Nara and Heian era and took root in Japanese culture. Noble families would elegantly observe the reflection of the moon in the water of a lake from a small boat they would cast out. They would compose poems on the moons’ beauty.

O-tsuki-mi is a significant event in that it involves offering thanks for the harvest taken in during September. We make an offering to God of Taro potatoes that have been steamed in their skins; this is the reason for calling the 15th September ‘Imo-Meigetsu’ a reference to harvested potatoes. 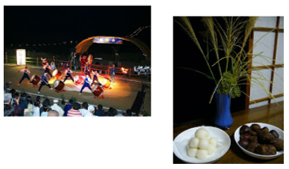 The 13th of October of the old calendar is known as ‘Ju-san-ya’, the moon of 13th of October. This is another night on which it is customary to watch the moon. Other days to watch the moon include ‘Nagori-no-tsuki’ and ‘Ato-no-tsuki’, on these days beans and chestnuts are offered instead of taro potatoes.
On both the 15th of September and the 13th of October, we place a stand on the balcony or porch of our houses. We offer dumplings and seven kinds of autumn weeds, Eupatorium, Ominaeshi, Ivy, Bush clover, Chinese bellflower, Pink and Arista.

If you look at the moon just once on either the 13th or 15th, it is very bad luck and is known as ‘Katami-zuki’. We always watch the moon on the 13th and 15th for good luck and a plentiful harvest. This festival shows the mysterious nature of the moon within Japanese culture. 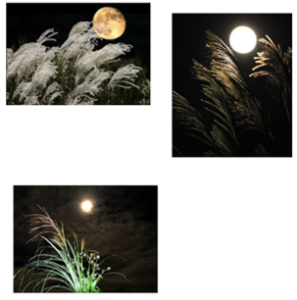