“Tanabata” The star festival during which everyone prays on a star

A famous legend tells of a couple called Hiko-boshi and Ori-hime that lived in heaven thousands of years ago. Hiko-boshi was a cowherd and Ori-hime weaved fabric. Upon getting married, they were so caught up in having fun that they neglected their works. Ori-hime’s father was so angered by this that he separated them forever, putting them at opposite sides of the galaxy. However, after they started working again he decided to allow them to meet just once a year, on the 7th of July. On that day, a magpie would build a bridge over the ‘Amano-gawa’ our Milky Way galaxy for the couple to use to come together and meet.

Today in Japan, we celebrate the 7th of July as ‘Tanabata’ we into cut down young bamboo plants and bring them our homes. We decorate the branches with ‘Tanzaku’ and ‘Chiyo-gami’ which are decorated strips of paper. Every family will write messages and wishes on these strips of paper, praying for health and wisdom. The day after ‘Tanabata’ we take the plants and place them in river.
Nowadays, ‘Tanabata’ is an important festival in Sendai in the north of Japan, Shonan near Tokyo and Yamaguchi prefecture in the south. The festival is so famous that between 200 and 300 thousands people gather to celebrate traditional Japanese summer dress called ‘Yukata’. 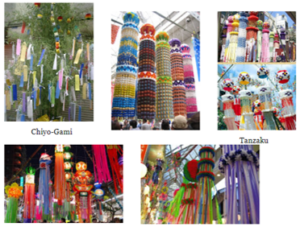 The G8 climate change conference held in Japan on the 7th of July in 2008 the first ladies of each country represented wrote messages on ‘Chiyo-gami’.
Mrs. Bush, the wife of former American president George W. Bush wrote the following: “May all children in every part of the world be cared for and loved, be free from hunger, be educated and live in peace.”
The first Lady of the Russian Federation, Mrs. Midvale wrote “For all the people of the world, the power of love and the traditions of Japan have come together and offered new hope for future success.
The Mrs. Sarah Brown, the wife of former British Prime Minister Gordon Brown wrote “expressing her sympathies for the relatives of the 500 thousand women every year who lose their lives in child’s birth.

The G8 and Meeting place ” The Windsor Hotel Toya ”

In Europe, it is believed that the Milky Way was created from the milk of Goddess Hera, the mother of Hercules. In Japan, we call the Milky Way ‘Amano-gawa’ (Heaven’s river) because it seems that the stars are arranged in a river-like flow. Both theories are very different. However different name are, Japanese people pray to the stars that shine above us all on the 7th of July.