Each family decorates the entrance halls of their houses with pine branches and other ornaments. As most companies shut down for a week or so following the end of the year, most people spend some quiet time with their families.

Most children get up early on New Year’s Day and wish their parents and grandparents a ‘Happy New Year’. After this, they receive some ‘New Year’s money’ in an envelope from their fathers and grandfathers. How much they get depends on their age but they might get anything from 1,000 to 10,000 yen. As the children can use this money for whatever they want and it is their only chance to get money, it’s a truly special thing to them. For families of high social status, New Year’s is a time when many people come to the house to say ‘Happy New Year’. The children in these houses can also get New Year’s money from these visitors so they can really rake it in’.

We call the 1st of January ‘Gantan’ and the first thing everyone does in the morning is open their postboxes. This is because they are expecting New Year’s greetings cards from friends, acquaintances and people they have helped throughout the year.
After checking their postboxes and giving the children their money, the whole family get together and have ‘Ozoni’ which is a New Year’s soup and make the first trip of the year to a shrine or temple to pray. Many people put some money in the collection box as a make of gratitude for the past year and to pray for health and the security of the family, happy marriages, success in exams and businesses and so on. People pray for whatever they want.

On the 7th of January, we eat rice porridge with seven vegetables to pray that our family will see no illness, disaster or accidents. This also senses to support the stomach as many people will have eaten too much over the holiday period. Also, the 11th of January is another special day when the rice cakes that have been placed out as decoration over the holiday period are broken with a hammer and cooked. 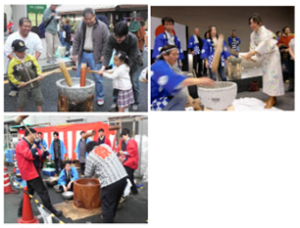 The country starts moving again on the 4th of January, with civil servants and company employees returning to work.