Shirakawa-go and Gokayama were listed as World Culural Heritage site in December 1995 for their uniqe style of architecture, found only in this region.
They are located in Hidaka mountain range, the backbone of the Japanese Islands, and on the east side of Hakusan National Park. They are very heavy snowfall and were therefor so called Solitary Islands. However they became to be known for its their architecture with with distindtively shloped roofing “Gasho-zukuri”.
Speaking of world cultural heritage sites, the most people imagine the unimaginably ancient building such as Peru’s Machu Picchu, Cambodia’s Angkor Wat, and  the Great Wall of China. However, the surprinsing thing about the Shirakawa-go world heritage site is that it looks just like a typical Japanese countryside area. 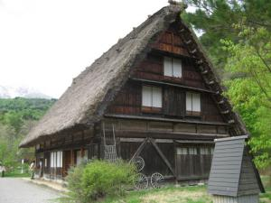 “Gasho-zukuri” is the construction style with steeply roofs like putting ones hands together.  It is built with a style called “gabled roof architecture with principal ridgepole” in wich the both end of the roof are like a open the book. It is built to endure a large quantity of snow normal for this region. Metal iron clamps and nails are not used for the joining of building materials, instead wooden wedge and neso, young branches of the Japanese witch hazel. 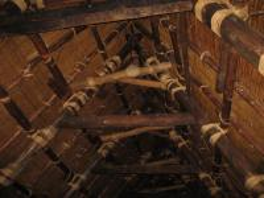 The gabled roof has an almost 60 degrees incline to shed heavy snow.There is Gasho-zukuri house that is 5 stories high. When you enter inside, you will see one giant Hinoki” pillar more than 150 years old and length approximately 11 meter long, going through up to the roof. Also you notice the many beams built with Katsura, Chestnut, and Zelkova wood, approximately 300 old years, everywhere. 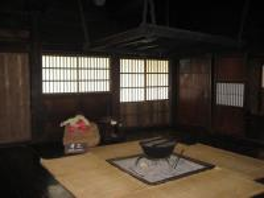 There is the hearth in the center of living room. The smoke from the hearth which comes up to the ceiling makes building wood materials glossy. This smoke is useful for insecticide and prevention of decay. The hearth is used as the lighting for cooking and air-conditioning. This smoke makes the building wood materials strong as metal.
In the village of Shirakawa, the Sericulture business was main industry. They used the huge space under the roof as the manufacturing facility of Cocoon which was used for making silk.
Once at every 40 to 50 years, they change the straw on the roof. They have the way of helping each other, called “Musubi”, the village bond. More than 100 to 200 villagers gather to do it. 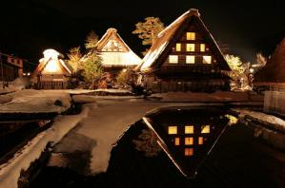 Bruno Julius Florian Taut once praised the architecture in Shirakawa village for its extremely logical and functional design, saying he had never seen anything like it anywhere else in Japan.

Nowadays, we Japanese still have the spirit of “Kizuna” (Bond) in our blood. When the great earthquake disaster hit the North-East of Japan, the news told of many people helping each other in the midest of such great confusion.
I understand that the origin of Japanese life and the spirit of bond might be the reason that Shirakawa volost was listed as par of the world cultural heritage site.